The Poetry of Pencils by Leafcutter Designs

The Poetry of Pencils

I think this all began when I set out to find some original Thoreau family pencils from the 1800s. Henry David Thoreau’s family had a pencil company which he grew up helping out in. Thoreau is credited for figuring out how to make a superior lead by adding clay to the graphite, enabling various hardnesses. He also invented new pencil making machinery. Quite poetically, the pencil would become Thoreau’s very important tool in the woods, the place where pencils begin their lives and Thoreau began his spiritual experiment in living.

Incidentally, there are no original Thoreau pencils on eBay so I’m assuming they go for a fortune in auctions. The Concord Museum collection has many Thoreau related artifacts. 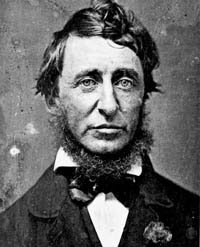 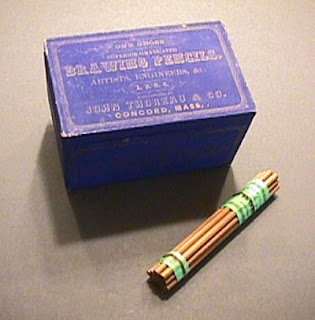 What did pop up in eBay is this sweet old Dixon Ticonderoga pencil box. (Notice that the side says “pleasing to the fingers.”) How could I resist? But the box was empty…

In the meantime, I had written a prose poem about a pencil as part of a series of poems about everyday artifacts. So I combined the poem and a pencil into one and created a scrolling pencil. 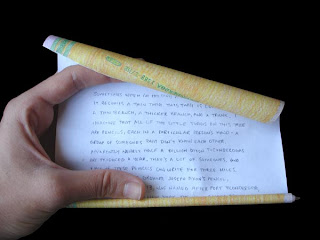 Here is the poem:

Sometimes when I’m holding a pencil I imagine that it becomes a thin twig. This twig is connected to a thin branch, and then a thicker branch, a thicker branch, and a trunk. I imagine that all of the little twigs on this tree are pencils, each in a particular person’s hand – a group of someones that don’t know each other. Apparently nearly half a billion Dixon Ticonderogas are produced a year. That’s a lot of someones. And each pencil can draw for 3 miles. That’s a lot of ground. Joseph Dixon’s pencil, introduced in 1913, was named after Fort Ticonderoga, a military post in New York. The name comes from the Mohawk “tekontaró:ken,” meaning “it is at the junction of two waterways.” This is what it feels like to write – and to live. We come to a small rushing junction with each word – with each moment. Sometimes we choose and sometimes we cannot. Sometimes we are swept away by the current, and sometimes desperately paddling back upstream. Pencil lead is the sap in the trees on the banks – the trees with the twigs that so many someones are holding on to. The sap is under the surface…Waiting. Tap it! Collect it in the tin pail of your heart. Boil it down till it’s thick – till it’s you.

If you want to know more about the history of pencils, check out the very well received 416 pages of “The Pencil” by Henry Petroski:

Lea Redmond is always looking for the poem hiding inside things: a salt shaker, a clothes tag, a hand gesture, a cloud. She is infinitely intrigued by the way experiences can slip from the ordinary to the extraordinary and she endeavors to design things that hold this possibility. Leafcutter Designs, her creative studio in Berkeley, CA, makes the world more playful and peaceful one little experience at a time.

All Posts by Category

Leafcutter Designs is a creative studio based in Berkeley, CA.Visit our online shop and promo & custom pages to learn more about how we make the world more playful.